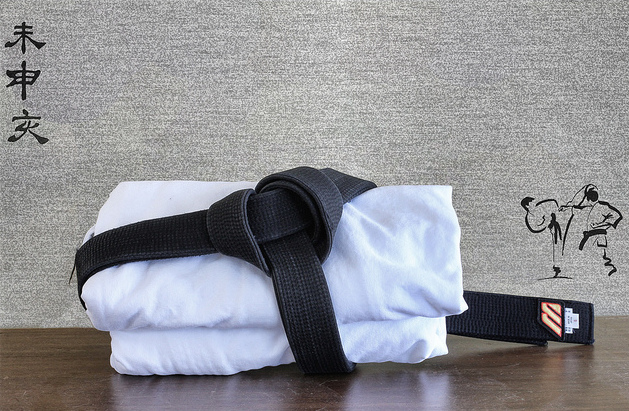 I recently went through promotions at my work and at my avocation. My work is marketing communications business. My avocation is Karate.

At work, we have annual performance reviews. There is the question of whether you promote a person to a higher level of responsibility, higher pay and perhaps a new title.

At most martial arts schools, it is different. I’ve taught Karate at Williams Martial Arts and Fitness for over twenty years. Opportunities for promotions are more frequent than annual reviews at work. Here they can happen  every other month or quarter. Students complete their routines and are tested on the mat.  Then there is the ceremony itself – a formalism and public pageantry which would likely be illegal in today’s workplace setting. Parents and friends are there to watch.

And as we award the karate-ka the next ranking and perhaps even a new belt, we state the following:

I have said it so many times I can recite it by memory.  As I think about those words, I think about what those outside of the martial arts world – those in the business world – could learn about the true meaning of meriting  a “promotion.”

First, there is the “great progress you have made …”

This is something most would agree. We should promote after, not before.  Progress first, promotion after. Too often we convince ourselves that we “see promise” in someone and promote them in hope that our hunch is on mark.  My experience in business is that too often our hunch is wrong.  For my Marine-trained sensei, it is simple.  First show that you have the skills for the next rank. But not just that. Show that you have the ability sustain those skills over time. Then, and only then, are you granted the promotion.

Second, there is the person’s “diligent study of the art …”

We promote in recognition of work. It is commendable that someone has been around for awhile. They’ve stayed the course. Loyalty is important. But true promotion should be an outgrowth of effort, not tenure.

Finally, there is the person’s “endeavor to attain a higher standard in the future …”

With this, I’ve likely crossed the border both of what is politically correct and what is HR compliant. In the martial arts world, you promote based on evidence that the person seeks to improve his or her station. They have to exhibit some desire to advance the art – the desire to not only improve their own skills but also the skills of others.

We could learn from that. You can make progress. You can work hard. But if someone doesn’t want to get better and is completely content to stay where they are and not move to a greater level of both skill and responsibility, is a promotion really merited? I don’t think so.

That, to me, is a reasonable standard for a promotion.

Whether you are in the dojo or the workplace.