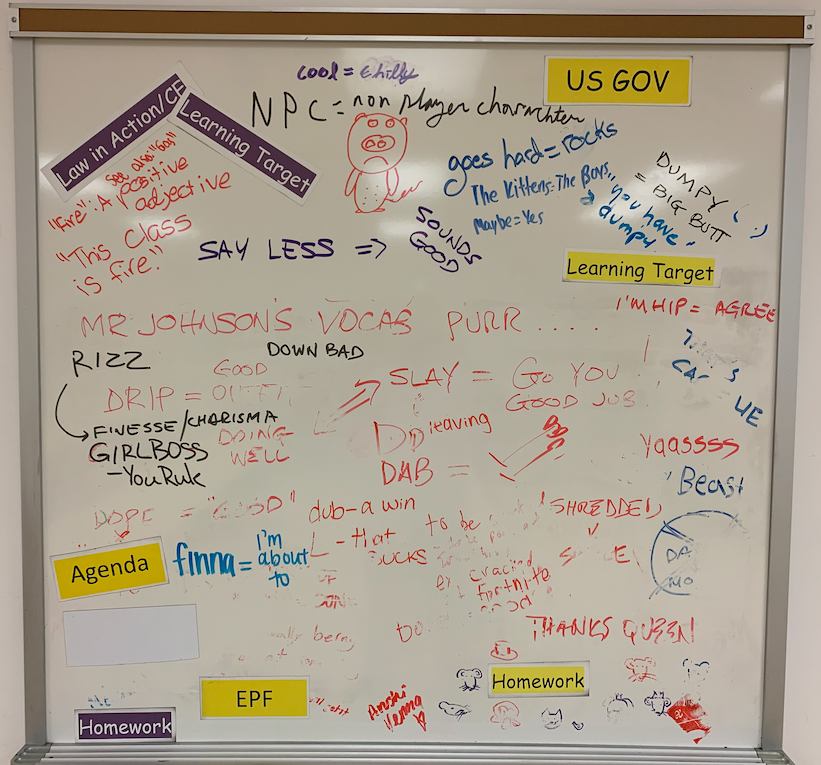 I just spent the better part of the 2021-22 school year with the students of Lake Braddock High School in Fairfax County, Virginia. I taught them about the U.S. Government, the American legal and court system, and current events. All three timely subjects. And I hope I helped some of our next generation of citizens to think critically, judiciously, and fairly through many of the important issues facing our society.

But as often happens, the teacher learns from his or her students. I know I learned a lot from mine.

One of many was bringing current my language and vocabulary skills. It all started when one day at the end of class, a student in the front row said, “You know Mr. Johnson … you’re a real girl boss.” I paused, not quite sure how to take the comment as I am neither a girl nor, for that matter, anyone’s boss. She assured me, it was a compliment. Others concurred. Indeed, a high compliment they claimed. I’m still not quite sure. The kids were pretty good at “playing” Mr. Johnson! All in good humor.

Clearly, I was behind and befuddled by the current nomenclature of GenZ. So my students came to the rescue! Together we devoted an entire whiteboard to it – that is, getting Mr. Johnson’s vocab up to snuff. You’ll see the last version above and I thought I’d share, knowing that many of you will likely know these things. It was all new – and often a bit odd – to this old guy.

I’ll leave you with one of my “goodbye” notes from a graduating senior. It read: “Thank you for being such a slay teacher and flicking up w/ me in class, you are a real G!”

Who knew? Not this old guy.

Thanks, students of Lake Braddock! You taught your teacher well.