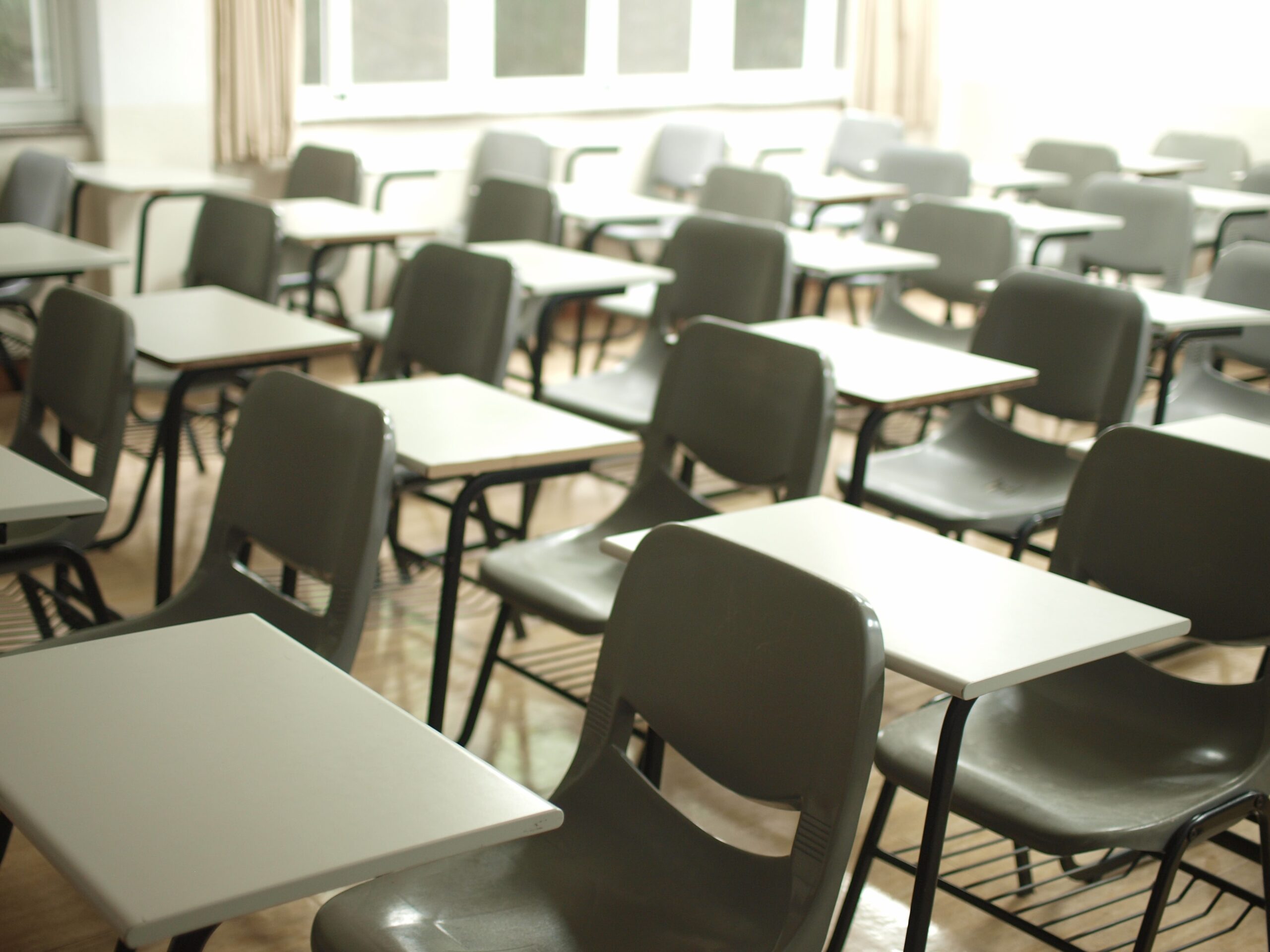 Photo by MChe Lee on Unsplash

When Republican Glen Youngkin was campaigning for governor of Virginia, I was teaching U.S. History & Government in Loudon and Fairfax County Public Schools. So, like many teachers in Virginia – particularly folks like me teaching social studies – I not only watched with interest but also experienced in real time Youngkin’s signature campaign issue: education.

It wasn’t that Virginia had poor primary, secondary, or higher education systems. Not really. When it comes to academics, Virginia’s schools are quite good. More about that later. No, Youngkin’s critique was more about ideology than academics. Among Youngkin’s complaints were that some Virginia schools (a) required students to wear masks during COVID (b) affirmed transgender rights and (c) taught “inherently divisive concepts” including “Critical Race Theory” or CRT.

Since then, conservative Republicans have gone “all in” believing they have the high ground on a hot-button campaign issue that traditionally has favored Democrats. But their focus seems to be less about whether Johnny and Sally can read, write, and do math and more about schools’ social and administrative policies.

A good example: the methodology used by the conservative Heritage Foundation in its recently released an “Education Freedom Report Card.” Their grading rubric for evaluating a state’s public education gives scant weight to academic performance. Rather, their grading focuses on things like whether the state provided school choice (aka charter schools) and whether a school system practiced “indoctrination” (whatever that is) and critical race theory. There is a section on spending and budgeting. It gets a bit wonky, but suffice it to say that a state got dinged if the Heritage Foundation didn’t like the way they spent their money.

Based on the Heritage Foundation’s methodology the top performing state school systems were Florida, Arizona, and Idaho. The worst performing states were New Jersey, New York, and Maryland. 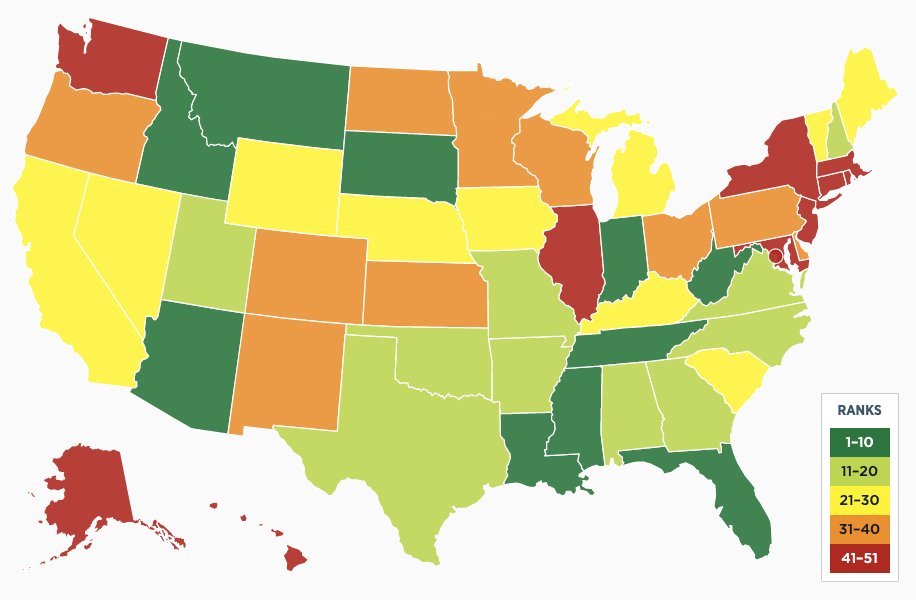 I was stunned. I went back and reread those “top five” and “bottom five” states/ I even went to the Heritage Foundation’s color coded “best” and “worst” map.

I thought to myself, something’s not right.

Mind you I have nothing but profound and abiding love for the Deep South. I grew up there. I went to school there. But my home state of Louisiana in the “top ten” best school systems in the country? Neighboring Mississippi ranked #6th? Really?

And then there is the Heritage Foundations “worst five.” Massachusetts? Maryland? You gotta be kidding me! I know the K-12 systems of both states. They are widely recognized as being quite good.

The more I thought about this, I couldn’t help but notice a curious thing. States that were heavily Republican scored well in the Heritage Foundation’s report card. States that are heavily Democratic scored poorly.

As most folks know, US News is famous for its school rankings. While their methodology has its critics, in US News’ assessment of K-12 system they focus on the following:

In sum, US News methodology was based on a system’s academic performance, not its fiscal and social policies.

I looked at the US News list. The differences couldn’t be starker.

New Jersey, one of the five worst states ranked by the Heritage Foundation for “education freedom”, was the #1 school in terms of US News ranking of “academic performance.” Massachusetts, also in the bottom five of Heritage’s list, was ranked #2 by US News. Connecticut, another “bottom five” school in the Heritage Foundation’s report card, was ranked #3 best in the country by US News.

I thought about this new-found passion around the politics of education. Just for grins I decided to take both ranking systems – Heritage Foundation and US News – and put them next to a snapshot of who’s actually running the state school systems. That is, was the state’s education system being run by Republicans or Democrats.

Here’s what I found: 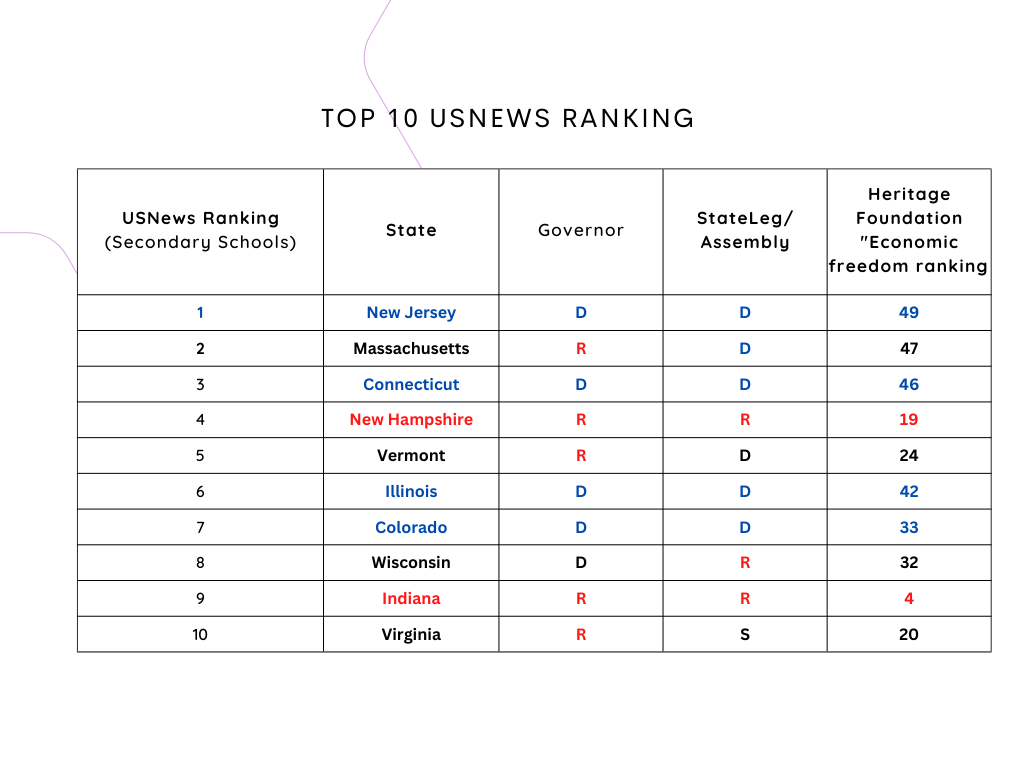 You can interpret the data any way you like. I’ll leave it for you to decide. Regardless, K-12 education, is likely to remain a “hot button” issue for both Republicans and Democrats. But at some point, people will need to decide what is more important to them – ideology or academic performance.