Today is Memorial Day.  Most people know it as the beginning of summer.  The day that marks the end of semester seasons and the beginning of  trips, vacations, heat, humidity, and summer storms.  It is Rolling Thunder, it is Joe and Kathy’s clambake, it is an extra day to get caught up on laundry and cleaning the yard. 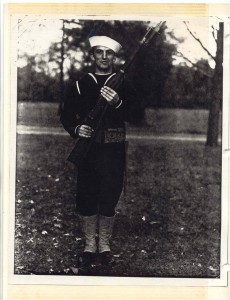 Of course it is supposed to be about remembering those who died on the battlefield.  People who died in military service.  People who risked and gave their life for something more than the ordinary, mundane, and simple things of life that most of us — including me! — spend our time obsessing with every day.

It is supposed to be a day to remember that there were people in our history — people in our lives — that gave up everything to protect a friend, fight someone’s battle, defend an idea.  We need to remember those people.  Not just because they deserve it.  But because we can learn from them.

This Memorial Day I think of my father.  He didn’t die on the battlefield.  If he had I wouldn’t be alive to write this.  But he gave up a lot for me, my family, and the county he loved.  He survived Pearl Harbor.  He survived Midway.  He made it through the battle of the Philippines.   And after WWII,  he made it through the Korean War.  He didn’t die in combat although he easily could have.  He was just lucky.

Today we should think about those whose luck ran out; whose children we never born; whose life and legacies ended in service to their country. 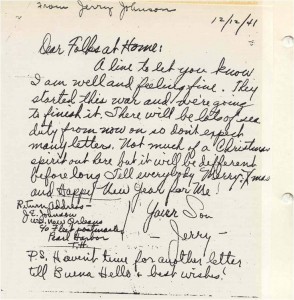 I took a moment this morning to read the post I submitted about my father in the Pearl Harbor Survivors Project.  I looked at an 18-year-old who quit high school to enlist as a soldier.  I read (again) the simple, small card that was the only thing he could send his mom after surviving the attack on December 7th.  And I reread the letter he wrote five days later.   “They started this war and we’re going to finish it!”  That was Dad, pure and simple.  Well, we did.  Dad survived.  But a half million of his fellow military service members did not.

So spend a few minutes today to remember all those who decided to serve a greater cause to defend — as best they could — their country.  And especially those who forfeited their life in service to us all.

Say thank you.  And hope that we can develop the same spirit within us to pass down to the next generation.