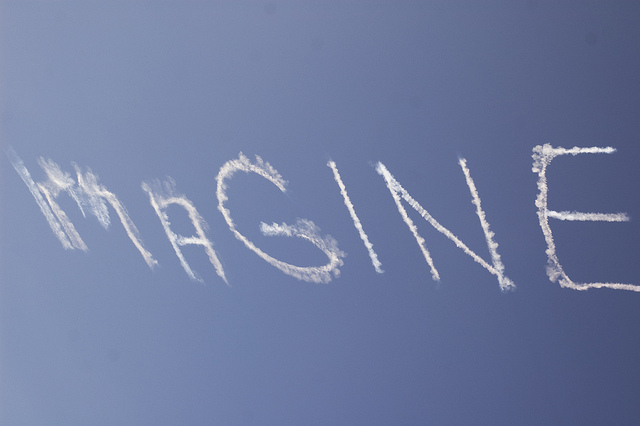 “I just can’t imagine …”
That, my friends, is the problem.  We don’t imagine, and when we don’t imagine, we don’t do.  Imagining and imagination are a critical first step to change.  Imagination is what enables us to make something that is foreign or non-existent relevant in our lives.  It is through imagination that we are able to “see” what is possible and in internalizing possibilities, we make new things happen, both in ourselves and in others.
I won’t do the obvious.  That is, I’m not going to quote that song by John Lennon.  (And BTW, I don’t think all the things he wanted us to imagine would be necessarily a good thing.) But I do think he hit on something that many great people have in common. And I’m talking about everyday great people, not just the famous ones. They have an imagination.  In fact, I suspect that it might even be impossible to do great things, unless one submits, indulges or engages the imagination.
I was reminded of the power of imagination at a recent lecture on hypnotherapy.  (My wife is a therapist and this was part of her continuing education classes.) The instructors had studied under Milton Erickson, considered one of the godfathers of medical hypnosis and therapy. They noted that hypnosis is typically used in therapy is to help someone change some behavioral challenge, often an addiction, disorder of fear.
They noted that the reason hypnosis can promote behavior in individuals lies in the simple fact that “imagination is more powerful than will.”  In many respects, that is what hypnotherapy is all about: enabling people to imagine themselves or others differently.
People set goals. They muster will power.  They make resolutions.  They join support groups. They feel they can “muscle” their way through.  But then they find they can’t.  Why?
Because despite all of our willpower (or lack thereof), somewhere deep in our subconscious we are not able to muster up the idea that we can actually do things like quitting smoking or over-eating or easing anxiety.  Too often we lack the idea of the possible.  We lack the ability to truly imagine and believe that life could be other than what it is.  And so we end up back in the life they’ve learned to expect for ourselves.
Great things, great accomplishments, require imagining they can be. It is not just thinking big.  It is the ability to see, and see clearly, a different path. I believe that was what Rev. Martin Luther King, meant when he said he had a dream. Because in imagining and dreaming he was able to take those first steps to change.
But let’s not just use our imagination to simply help ourselves accomplish the things willpower can’t.
Let’s help others imagine those things that willpower alone won’t allow them to do.
Imagination can be contagious.  And liberating.  And when it spreads, everyone is better for it.