Capitalism and free market economics are in a world of hurt.

They just begged us for 700 billion.  Doesn’t quite jive with the “free markets are the fairest, most efficient …” fill in the blank. 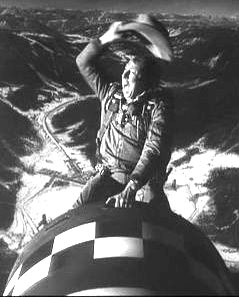 To their credit, there are hard core conservatives and libertarians standing their ground, effectively telling the financial markets to pound sand.  Personally, I don’t think that’s helping their cause.  For me, it conjures up the scene in Dr. Strangelove where Bradley rides the bomb bronco-style into oblivion.

There’s Senator Shelby, thumping a list of names of economists who say all this talk of bailout won’t work.  All that while we’re looking down the last rungs of Dante’s financial inferno.

Indeed, the conservative’s case had become so bad that their bugaboo in preventing them from supporting the bailout package was possible benefit to ACORN — a liberal community organizing group.  This, while the brunt of the bailout was for financial institutions and Wall Street firms that helped got us into this into our mess in the first place.

Capitalism and the free market philosophy that underpins it are in a world of ideological hurt.  The events of the last few months have caused folks throughout the world — many of whom were skeptical of capitalism in the first place — to say they’ve had enough.  The Wall Street Journal article headlines “Crisis Stirs Critics of Free Markets.”  The New York Times, “Criticizing Capitalism From the Pulpit.”

The ghosts of Adam Smith and Milton Friedman are turning in their grave.

Look for a free market counter offensive soon.  Any takers?  Any advice?