Reason and the Reason Rally 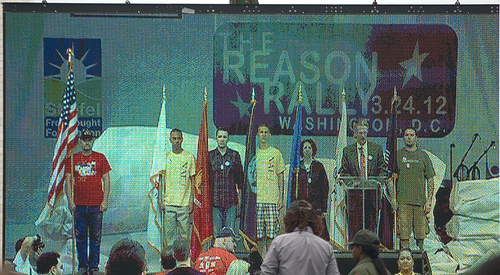 Today being Sunday, I thought of the Reason Rally.  That was the rally for atheists on the Mall yesterday that headlined scientists Dr. Richard Dawkins, comedian Eddie Izzard, and magician James Randi.  That and yesterday a good friend sent me a piece that appeared in the New York Times by Gary Cutting with the provocative title, “Does It Matter Whether God Exists?”

The event and the article got me thinking about all my atheist, agnostic and theistic friends and as a Christian, the many wonderful and oftentimes impassioned conversations we’ve had about God, faith and religion.  As I thought about my friends and read through Gary Cutting’s article I also thought about how many things atheists and Christians can actually agree on (that is of course, putting aside the question of whether there is or is not a God.) and how silly it was that we can’t embrace our agreements and move on to more interesting discussions and do so as Peter admonished Christians in “gentleness and respect”.

Here are at least three things on which I think many Christians and atheists can agree.

So on this Christians and atheists can agree:  (1) you can be religious and spiritual without a God; (2) you can be a good person without believing in God; and (3) how you behave is pretty important.

On this, we agree.

All I’d ask of friends at the “Reason Rally” to consider, is that belief in a God is a quite reasonable and logical conclusion when working through the answers to three important questions about life.

You can disagree with ALL of the above.  All I’m trying to do is suggest to atheists, agnostics and those who challenge faith in God that (a) we agree on more than you might think we do; and that (b) while you may not agree or believe that a God exists, belief in God is indeed a quite reasonable thing.

And if you’re interested, read the thinking of legendary British philosopher and former icon for atheism Anthony Flew – “My Pilgramage from Atheism to Theism.”  We’re not that far apart.

One Response to “Reason and the Reason Rally”