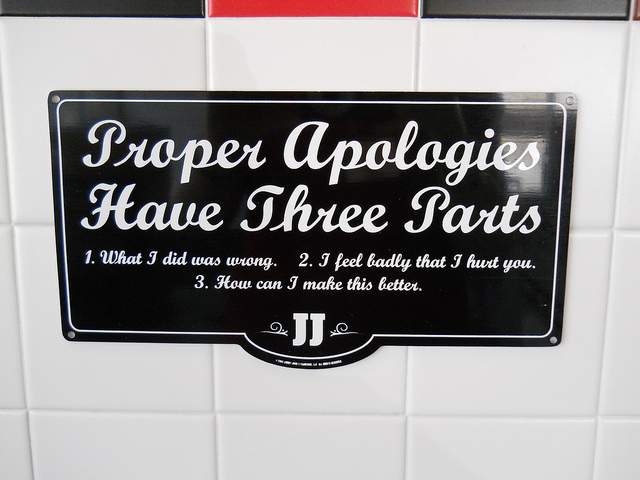 Something is happening to apologies.  I don’t find them as much as I used to.

A report will be late.  Something won’t get done.  Or it will get done incorrectly.  Someone says something harmful.  Or takes an inappropriate action.  And more often than not when I raise this with a person what I’ll get is a blank stare and an “OK.”  Maybe a question to the effect of “So what do you want me to do?”

Am I asking too much?  I’m not asking anyone to grovel.  No need to tear your clothing and douse yourself in ashes.  Just makes me feel a bit better and give me a sense that you understand that you messed up.  Just so I know that you know.

So why are apologies disappearing?  I’ve got some theories.

First, they increasingly aren’t received well.  Apologies used to be viewed as the path toward forgiveness.  And forgiveness was the path back to wholeness and community.  Today, apologies are viewed less as the first step toward reconciliation and more as weakness.  That is, nowadays people often use someone’s genuine confession as a club to whack them upside the head.

All quite sad, really. I remember a rather infamous event at a business meeting when I apologized to a client for running late on a small and somewhat inconsequential element of a project, promising that we’d do double duty to catch up.  What I saw as a small acknowledgement sparked a client explosion.  He harangued me with a series of screams along the lines of “how can you …?” “how could you …?” “explain to me why …?”  “I demand an answer …!”  If that client was the only measure, I’d likely never apologize again.  The broader point is this: if apologies are disappearing perhaps it is because society isn’t embracing the apology as it ought.

Second, the apologies we do see are pathetic.  What apologies am I talking about?  Lance Armstrong.  Tiger Woods.  Paula Dean.  Anthony Wiener.  Need I say more?  Not exactly role models, eh?  If those were the only examples I had of a person apologizing, then I would never apologize either!

Finally, there may be a link between the decline in apologies and that of religion.  Let me explain.  A generation ago in the United States, religion was mainstream.  And as most of that was Judeo-Christian religion, there was a very common practice that most people learned through their weekly trip to the synagogue or church:  asking for forgiveness.  It was an apology of sorts.  It was a weekly recognition that you messed up.  In the Anglican tradition it was framed as messing up in “thought, word, and deed.”  And you asked God for forgiveness.  Then things are better.  You do that throughout your growing up and it becomes a habit.  A lot of young people today don’t benefit from that practice.

Whatever the reason, I’d ask that we bring back authentic apologies.  Let’s celebrate them, embrace them, reward them.

And if you think I’m way off.  If I have offended you, your faith, or your generation in any way.