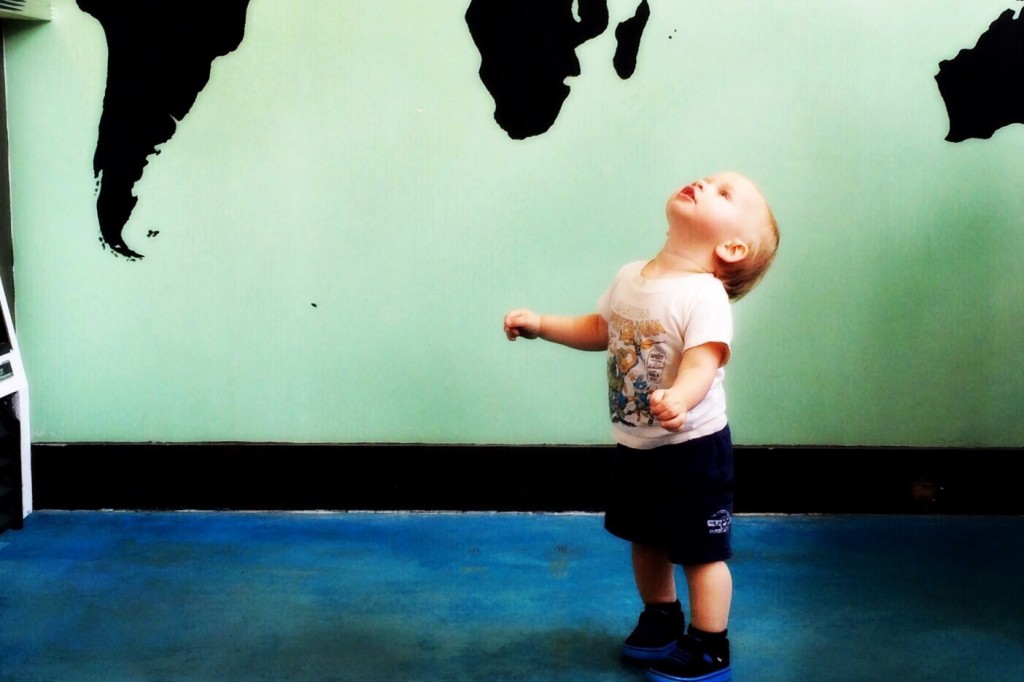 Yesterday I came home and went for a walk with my one-year-old grandson, Marlowe.

In the next 90 minutes Marlowe reacquainted me with something we all had once and have, to our detriment, lost.

It took us about fifteen minutes to navigate the stoop down to the sidewalk.  Marlowe’s better at going up stairs than down them.  But it wasn’t that it.  There was an iron handrail that he had to grab.  He stopped and tugged on it a bit.  Slid his hand down the cool metal.  Gave it a big whack a couple of times.  Then he turned to look at me with a big toothy grin.

I’d never seen anyone appreciate and marvel at a simple metal hand rail like that.

We ambled down the sidewalk.  We stopped at a patch of grass and I showed Marlow how you can pluck a blade and roll it between your fingers.  And for the next fifteen minutes that is exactly what we did.  For Marlowe, each tug, each blade, each twist between his chubby fingers was an absolute joy.

He spotted some bird fiddling with the leaves and debris in a neighbor’s gutter.  His hand shot out and he pointed to the birds.  “BAH!” he said.  “Birds,” I replied.  “BAH!”  “BAH!”  “BAH!” he squealed.  Each was said with utter astonishment.  I’m sure it wasn’t the first time he saw a bird, but it sure seemed like it!  And so we sat for God knows how long, just looking at the birds punctuated occasionally by Marlowe’s “BAH!” after which he would turn to me with an expression that read, “Wow, Grandpa, did you see that?  Whoa!”

There were plenty of other adventures.  A branch became a broom and Marlowe intently and joyously learned how to knock things off the sidewalk with it.  Ants were this astounding phenomenon that we followed with glee and delight.

And every time he would look at me and his whole countenance could be captured in one word:  Amazing!

One of Louis C.K.’s more famous skits is called “Everything is amazing and nobody’s happy.”

I think why that skit became so popular is because it is true, and we know it to be true, and we’re somehow sad that we’ve lost that sense of simple wonder and delight that is the world around us.  We analyze and quantify and qualify everything until we have squeezed to death and blinded ourselves to the essential amazement that lies in just about everything.

In a recent lament, writer Anne Lamott said about our data-driven lives, “What this stuff steals is our aliveness,” … “Grids, spreadsheets and algorithms take away the sensory connection to our lives, where our feet are, what we’re seeing, all the raw materials of life, which by their very nature are disorganized.”
The world around us is truly amazing.  It is only when we approach it with curiosity and wonder that we really see it, and begin to relearn what it is to be human.

So thanks, Marlowe.  You’re truly amazing!  And so is everything else.

One Response to “Wonder”