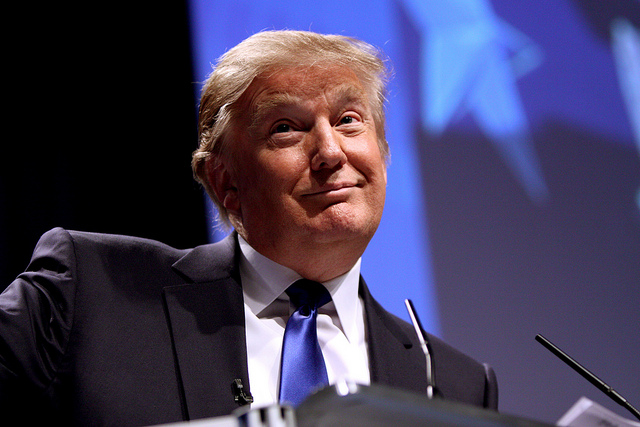 I’ve tried hard not to write this. The one thing this world may need least, is yet another article on Donald J. Trump. I go to work and there’s Trump.  I drive home and I listen to the radio and it is all about Trump. I go home and turn on TV and there’s Trump. I go on vacation to the places FAR away from Washington DC and there he is – TRUMP!  I confess to Trump exhaustion. He follows me everywhere. My wife and I can’t even talk about it.

So consider this a catharsis. A Trump exorcism. A purge. You may not agree with anything that follows. And if you don’t please don’t be angry with me. Know that I’m just trying to explain the unexplainable and somehow understand the unfathomable. No, I’m not talking about the origins of creation and the existence of God. I’m talking about the small, remote and horrifying chance of Donald J. Trump becoming president of the United States.

So let’s get started. How do we explain what is happening to us?

I would suggest starting with one of the best articles I’ve read to date on this phenomenon – a piece by David Gergen. It is about narcissism and leadership. It is very well written and well researched. I think starting with narcissism is a good and appropriate place when trying to understand and explain the Trump phenomenon. I would only add that while there’s a historical nexus between narcissism and leadership, there’s a human nexus as well. We all have our inner Trump. We all have our “Hey, look at me!” “Hey, ain’t I great!” “Hey, if you gave me that problem I’d fix it so fast it would make your head spin!”

So with our own “inner Trump” in mind, lesson one (and perhaps the most controversial).  Personableness can get you far.

I understand if you might take issue with the premise that Donald Trump is “personable.” How can you label as “personable” someone who calls immigrants “rapists” and liberal women that he doesn’t like “fat” “ugly” and “stupid”? And then there’s Megyn Kelly.

But notice how Trump will, in the same breath, match every critique with a back slap.

Illegal aliens are “rapists”, “thugs” and “thieves”. Oh, but “I love Mexicans and the Mexican people.”

China is “sucking us dry” and at the same time “I love them too … they stay in my hotels!”

Perhaps the only thing that both friends and enemies agree on about Trump is that when you are dealing with him individually he is a very “genial” guy. At a personal level, “the Donald” is engaging, witty, and yes, even generous. Beneath his braggadocio is a certain folksy personableness.

This trait can get you far. And it isn’t new.

A lot of people loved the folksy, genial, Ronald Reagan even as he was vilifying impoverished mothers as “welfare queens” and ripping solar panels off the roof of the White House. Reagan was about the most anti-union president we’d had, yet he won the labor vote.  Why? Perhaps one reason is that he seemed so personable.

Second, Trump underscores the societal focus on the inflated self.  He is a logical outworking of our diminished appreciation of moderation, modesty and humility.  All three qualities were once considered attributes of character and virtue.  They were things we exalted. The strong, silent, self-effacing hero. Those days seem far away.  We have traded our John Waynes and Clint Eastwoods for the fast-talking, wise-cracking, over-the-top and modestly vulgar.

To be sure we have always had gadflies and the delightful fringe. We’ve seen value in the quirky and those on the outside who dared speak “truth to power.”

But we have eviscerated the moderate middle. In politics, we voted out moderates like Dick Lugar and Mary Landrieu. The moderate elected officials who had been successful – folks like Evan Bayh and Mitch Daniels – have simply walked away rightly figuring there are better things to do with their time than try and fiddle with the mess that is the American polity.

We have penalized the thoughtful and heaped praise on the cock-sure. When we vilify compromise, make all politics personal, and chase away the majority of people who have a real spirit of public service, what we get is Donald J. Trump.

Finally, Trump shows us the sad dysfunction of news media.

I have friends both inside and outside of the news media and if you get them alone for a moment, most agree. The news media is dying.  Or if not dying it is morphing into something unrecognizable. It is adrift, either caught up in its own pursuit of a political agenda (Fox vs. MSNBC), chasing the latest tweet, or simply devoid of a filter of decency and decorum.

It is good that years ago they built something called a Newseum. At least you can still find good journalism somewhere.  Trump is an avatar to the news media’s desperation for a story. He is a testament to its waning capability to challenge the inaccurate or absurd. What we see today is much worse than the yellow journalism of Hearst or the liberal bias of Cronkite and his cronies. It goes beyond the traditional “if it bleeds it leads” problem. It is a news media that is rubber necking in unimaginable proportions. And we are forced to watch.

According to legend, Joseph de Maistre once coined the phrase “Every nation has the government it deserves.” Perhaps. And perhaps that is the frightening reality that we have to face when we try to explain the current popularity of Trump.

A small footnote. De Maistre was no fan of democracy. He worked for Russian Czar Alexandar I. He believed hereditary monarchies were divinely sanctioned. He viewed constitutional government as beyond the capabilities of the average Russian.

If alive today, he’d probably be voting for Trump.

image of Donald Trump by Gage Skidmore via Creative Commons