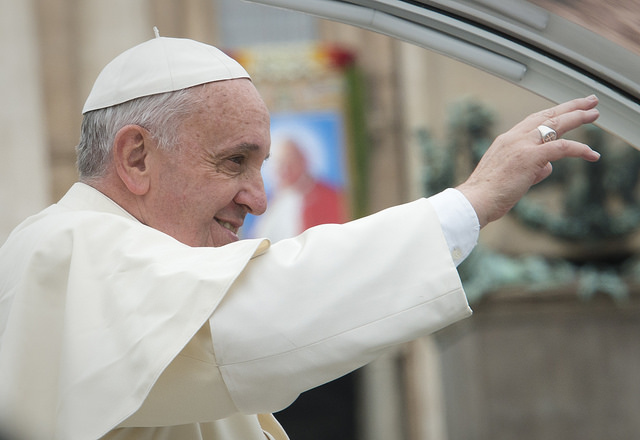 A few weeks ago I wrote a piece titled “Explaining Trump.” It was my struggle to understand the success behind Trump’s political communications. With the end of his first visit to the United States, I thought it would be a refreshing alternative to consider communications  lessons from Pope Francis.  Surely if we can learn from “the Donald” then there must be lessons we can learn from “the Holy Father.”

I was able to follow Francis’ visit closely. I was on the south lawn of the White House when Francis was received by President Obama.  I watched his parade down Pennsylvania Avenue.  I watched his appearances before Congress, at the United Nations, at Madison Square Garden.
We can learn a lot of things from Pope Francis. I’ll mention three.
Speak clearly.  Francis was right about his English pronunciation.  It isn’t very good. Awful, really. But that didn’t hide a clarity of purpose.  Francis speaks plainly. His concepts are simple. The primacy of love. The beauty of life. The dignity of humanity. We should help those who need help. We should protect the vulnerable. We should empower the honorable. We should care for each other. And he speaks not just with words but also with deeds. Sleep in a simple room. Ride in a Fiat. Wear comfortable shoes.
We can all learn from this. Business, like life, is difficult. But it isn’t all that complicated. Amidst obfuscation all around us, clarity is refreshing.  Clarity energizes while it soothes. When we speak clearly and simply, people take notice.  They smile. Even more so when your clarity is not just in what you say, but how you live out each day.
Observe intently. Francis is observant. He engages with purposefulness. He sees the small immigrant girl being shuffled away in a parade and calls out to her. He looks into the eyes of a homeless person and then washes his feet. He laughs and jokes with the school children. He reaches out and playfully tousles a young person’s hair. When before a joint session of Congress, Francis said he was not there to “preach”, he was not there to “address,” he was there to “dialogue.” (Which is a very ambitious thing to do with this U.S. Congress!)
We fail to communicate when we fail to observe.  When we are self-absorbed, self-obsessed and otherwise self-occupied we fail to see, understand, and connect with those around us. We all would benefit from less communicating and more dialoguing.
Love recklessly. Finally, Francis is a reminder of the power of passion and love. I find it impossible to separate what Francis says and who Francis is from his passion, enthusiasm and devotion. There is a winsomeness to his heartfelt affection and concern for the “others”. And not just some “others.” All “others.” Francis is the antithesis of targeted communications. When you see him and listen to him you get the sense that no one – regardless of station – is beyond his reach.
We live in a world suffocating from exclusivity. We micro-target ourselves to the point of isolation. By defining our identity so precisely, we lose sense of who we really are.  By appealing to a targeted few, we appeal to no one in general.  We would all do better by rethinking our disdain for the “lowest common denominator.”  Perhaps the lowest common denominator is, in fact, our highest calling.
So there it is.  The next strategic communications plan for the next client.  Speak clearly. Observe intently. Love recklessly. It seems to be working for Francis.

One Response to “Lessons from Francis”