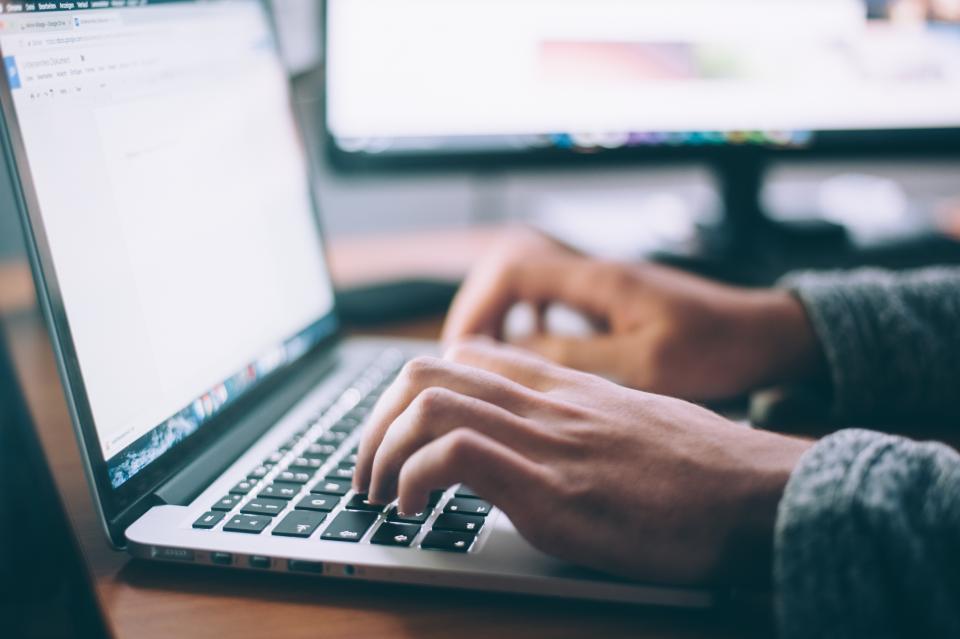 Recently, a young man responded to a post that my wife, Sanderijn, put on her Facebook page.  What followed is something you really need to read for yourself to fully appreciate but the quick summary is this.

Our daughter, Sarah, and her two children were in town for the weekend. Sanderijn, Sarah and Sarah’s two boys aged two and four, decided to enjoy the Friday autumn afternoon by walking down to Lake Anne Plaza. Once there, Sanderijn “checked-in” on Facebook at the Lake Anne Brew House with the post “Beer time with very social 2 and 4-year-olds.”

Someone was not amused. He wrote “I can’t express how wrong this sounds. Does someone need to call CPS?”

(Note. For the uninitiated, CPS stands for Child Protective Services, a Virginia government body whose mission is reflected in its title).

What followed was a marvelous (and personal) example of three ways social media is destroying civil communication. As a communications professional, it is something I will quote at length in future presentations and lectures. 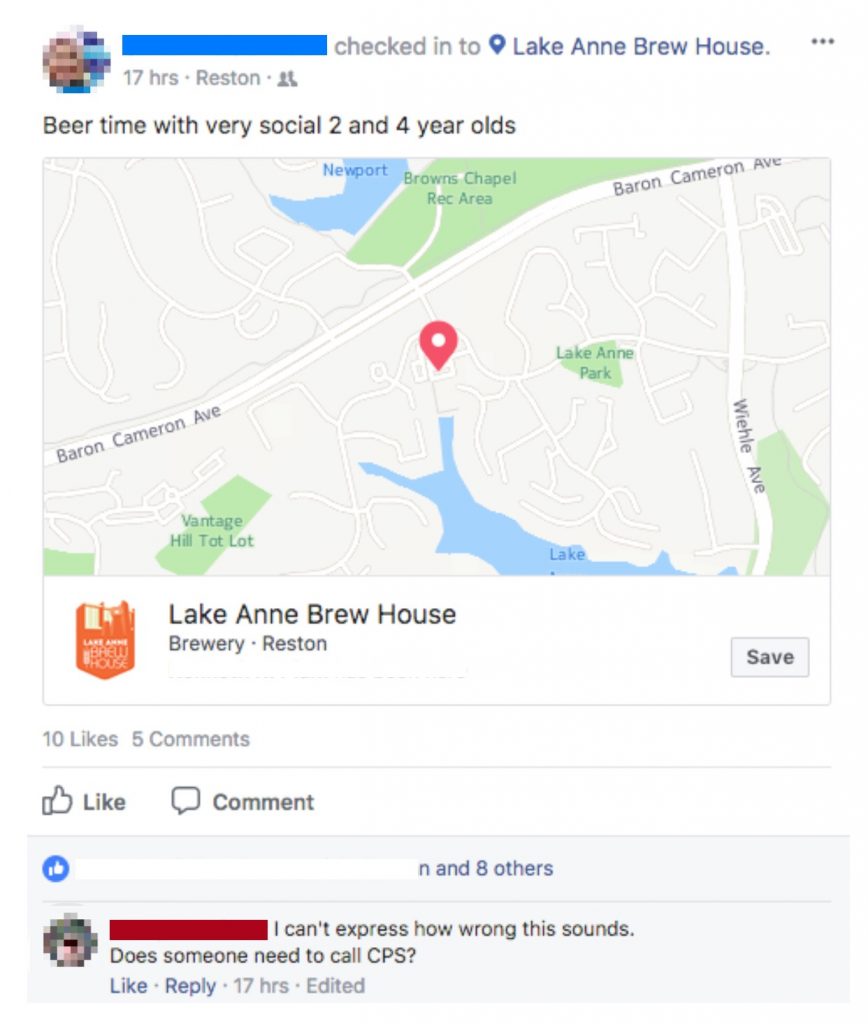 First, the reaction by a person who will go by the name of “Mr. Bk,” along with his following comments, is a case study in “virtue signaling.”

Virtue signaling is when someone uses social networks, in this case, someone else’s post, to show others how morally correct they are. In this case, one Mr. Bk is signaling his moral superiority by (continually) noting his compassion and in this case concern, for children being exposed to someone drinking a beer in public.

After his initial, ill-informed righteous outrage, he follows by constantly reminding us of his benevolence, patience, wisdom, search for truth, care for humanity, and steadfast purity of spirit. He even goes so far as to remind readers they should be grateful and that we are so lucky to have people like him around.

This is the wonderful thing about virtue signaling:  you can claim and broadcast your piety and virtue through social networks without actually having to do anything to merit it. 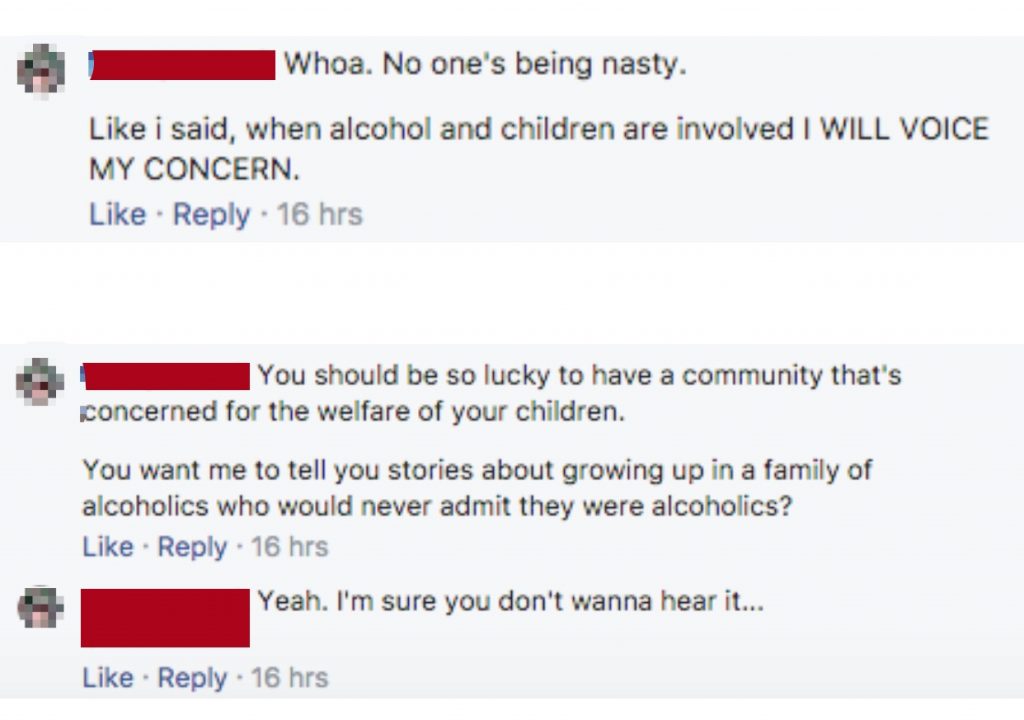 Hit a few buttons and “poof”! You’re in someone’s face. And you’ve written something stupid. No knowledge or context needed.

The irony here is that a simple 10-second search by Mr. Bk would have shown that the Lake Anne Brew House is located in Lake Anne Plaza, Reston, Virginia, a wholesome family and child-friendly lake development with fountains and play areas and kids joyously running and screaming and doing what kids do in a fresh open-air environment. He would have also found that the Brew House serves apple juice and kids snacks, that it is adjacent to a Baptist church and coffee shop, and that across the plaza is a used bookstore with a wonderful selection of kids books along with a second-hand children’s clothing store.

The ease and ubiquity of social networks – which we can carry with us and never leaves either our hand or watchful eye –  give us access to others 24/7. These mobile devices act as technological sirens, who, like those of Greek mythology, lure consumers into countless acts of ignorance, typing and posting without making any effort to determine or deal with reality.

Instead, we see the word “beer” followed the phrase “4-year-old” and immediately express a virtual “OMG!, some drunken sot is dragging innocent babes into the devil’s chamber” and wonder aloud if someone should call 911 and child protective services!

Side note. Mr. Bk’s rants are also a good example of the well-known cognitive bias called “anchoring.” That happens when you stick with an initial position even after being confronted by conflicting facts – in this case being told that the initial post was from a mother, grandmother, and social worker of 20+ years who has spent a good part of her life working with children and youth to try and help them escape from real risky and abusive situations. That the grandmother walked to the plaza (Mr. Bk at one point suggested everyone call a cab) and had a single beer.

None of this information impressed Mr. Bk.

He stuck by his figurative guns and insisted not only that he did the right thing, but that he would do it again and that, yes, we should be grateful for him doing so. Indeed, he found it “disturbing” that we didn’t care much for his ill-informed post and decided not to shower him with praise. 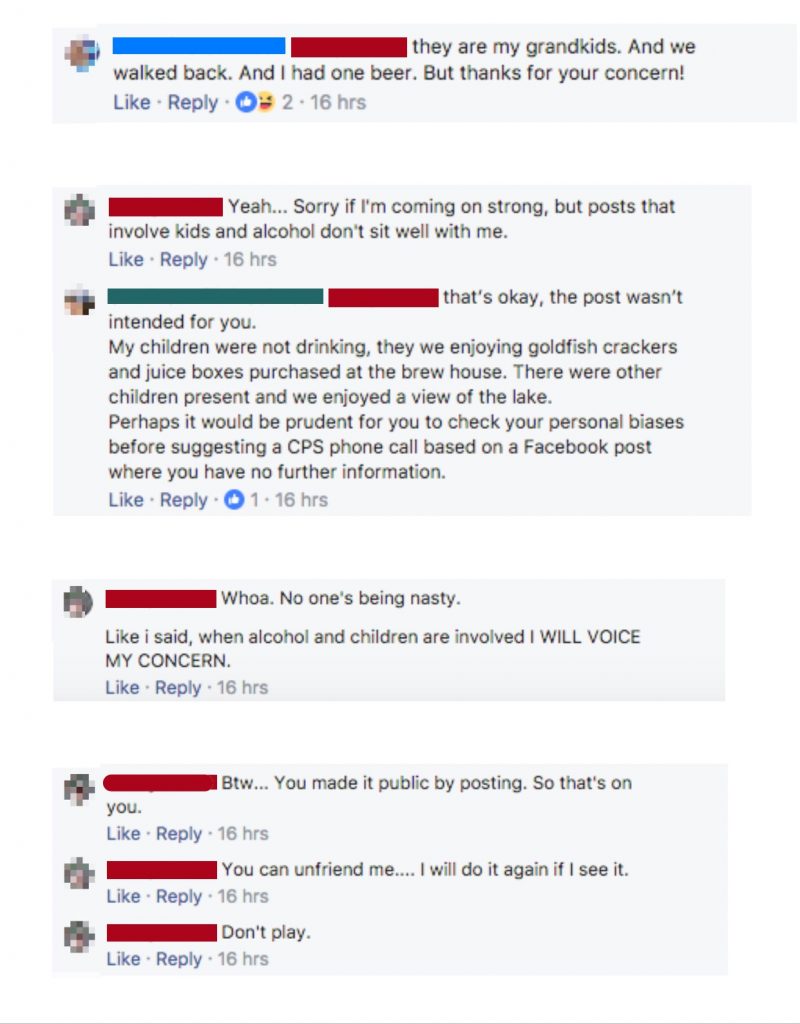 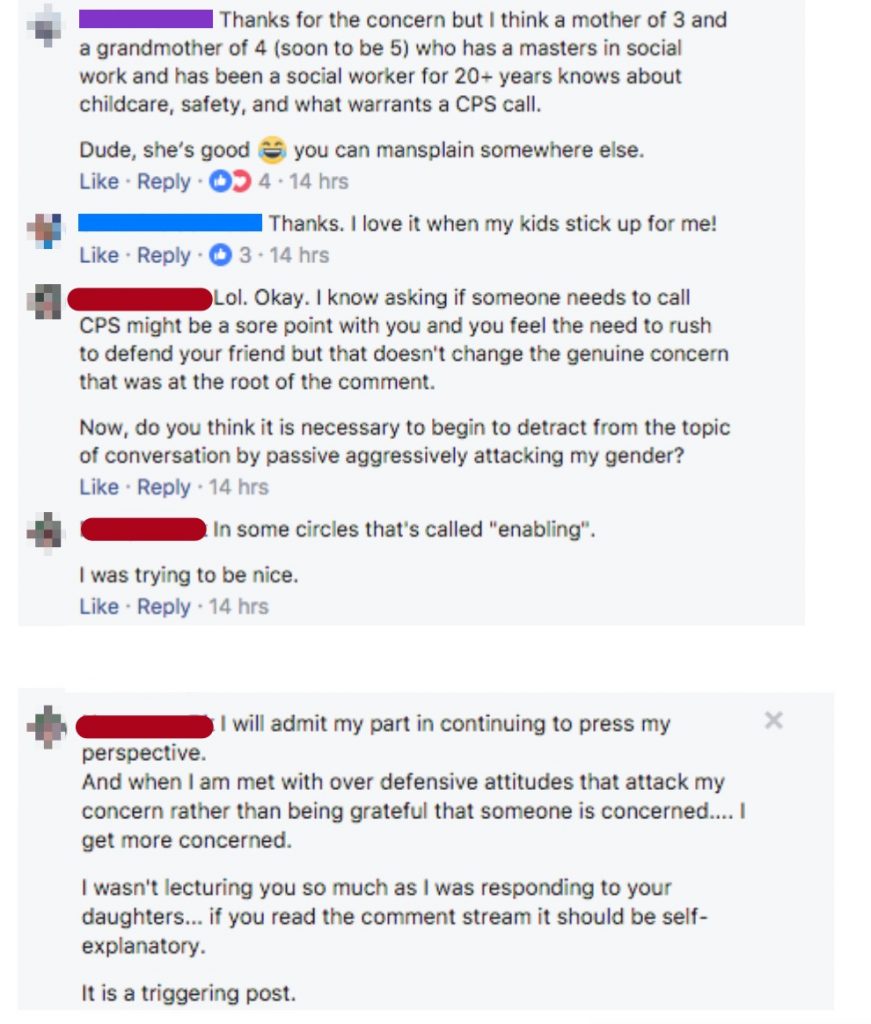 Finally, it was a wonderful example of social media troll behavior.

A social media troll always has to have the last word. They can’t let something go. They become so intoxicated with themselves and their posts (which they consider an extension of themselves … perhaps even more important than themselves!) that they HAVE to respond.

For these people, their position is so correct, their thoughts are so right, and everything they think is so important for people to understand and accept, that they post unceasingly in a desperate attempt to force their views upon others.

So this is this is how social media and social networks have warped the world modern social interaction.

A place where people use social networks to draw attention to their moral superiority.

A place where people become so addicted to their own voice and seeing that voice in print, that they are unwilling and unable to stop themselves from perpetuating meaningless half-truths.

And yes. All this is why the United States has the president that it has today!