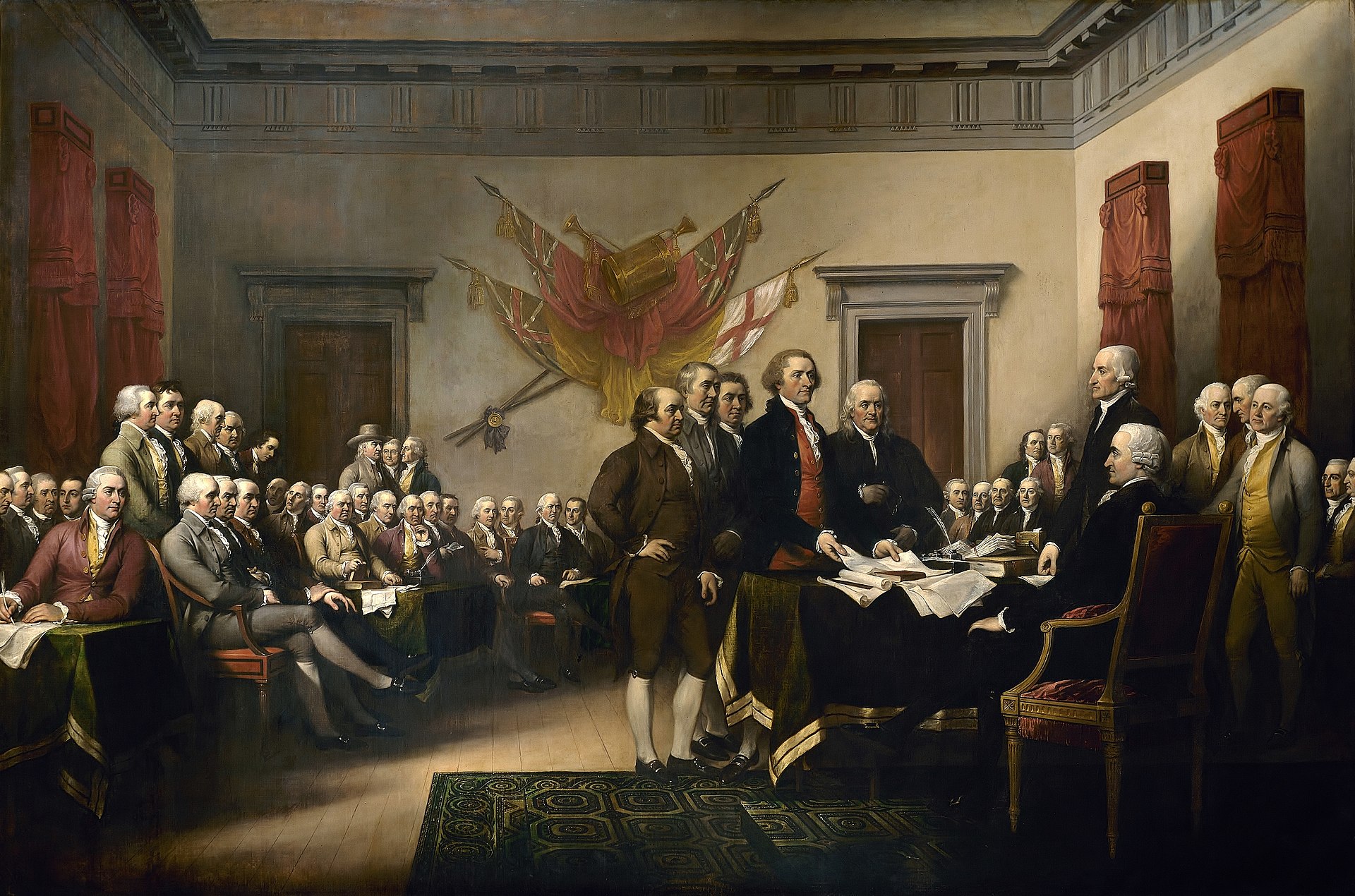 Declaration of Independence by John Trumbull, 1819

The 1619 Project isn’t without its critics. The folks at the conservative Manhattan Project aren’t fans. But by my count, no one gets it 100 percent right. Not the 1619 Project, but in this case, certainly not Senator Cotton.

In defending his “defunding” of anyone associated with the 1619 Project, Mr. Cotton said this:

“We have to study the history of slavery and its role and impact on the development of our country because otherwise we can’t understand our country. As the Founding Fathers said, it was the necessary evil upon which the union was built, but the union was built in a way, as Lincoln said, to put slavery on the course to its ultimate extinction.”

According to these same reports, Cotton claimed that instead of portraying America as “an irredeemably corrupt, rotten and racist country,” the nation should be viewed “as an imperfect and flawed land, but the greatest and noblest country in the history of mankind.”

There’s a whole lot wrong about Senator Cotton’s comments. Perhaps he was having a moment.  I’ve said a lot of stupid things in my life and most of them – fortunately – were not to a reporter. But there are many claims here worth a historian’s review.

One thing to start. Lincoln was a great president – some would argue our greatest – but he was not a Founding Father.

To be sure, a fair and complete read of Lincoln’s history and record put him clearly in the anti-slavery camp. But when Lincoln unilaterally canceled emancipation proclamations by his generals, and then the following year signed the 1862 Confiscation Act that allowed the confiscation of rebel slaves because they were … well … “property,” abolitionist Horace Greely challenged the president to make clear his position on the abolition of slavery. Lincoln famously replied:

Lincoln’s first duty was to the union, not the abolition of slavery.

But the phrase by Sen. Cotton that has (or had) everyone talking about, was his claim that the Founding Fathers felt that slavery was a “necessary evil upon which the union was built.”

From a historians’ perspective, there are quite a few problems with this one too. First, the Founding Fathers were not a monolith. They were different people with very different perspectives on a host of issues, slavery among them. Some might suggest that the few areas of agreement among them were Enlightenment ideals, deism, and independence from the King and parliament.

There was considerable diversity of opinion over the institution of slavery – from staunch abolitionists (Adams, Hamilton) to guilt-ridden patriots (Jefferson, Washington) to straight-up racists (Virginia’s Edmund Randolph and Georgia’s James Jackson).

As historian Stephen Ambrose has noted, of the nine presidents who owned slaves, only one, George Washington, freed his. And of course there’s Jefferson, who penned the immortal “these truths are self-evident, that all men are created equal.” But neither Jefferson nor the rest of our Founding Fathers put that into practice. Writes Amrose:

“Jefferson, like all slaveholders and many other white members of American society, regarded Negroes as inferior, childlike, untrustworthy and, of course, as property. Jefferson, the genius of politics, could see no way for African-Americans to live in society as free people. He embraced the worst forms of racism to justify slavery.”

It would be hard to make the claim that there was a wide-spread consensus amongst the Founding Fathers that slavery was either “necessary” or “evil.” It would be easier to make the case that many (if not most) of the Founding Fathers saw slavery not as “necessary” but “normal.” Some in the paternalistic sense – that whites had the obligation to lift blacks out of their backward condition. Some, like Jefferson, in the very racist sense – that whites were inherently and genetically superior to blacks.

Perhaps the best “spin” that one could put on the Founding Fathers and slavery was their overall tolerance of it. Or perhaps one could use the word that historian Joseph Lewis used to describe the slavery debate amongst the revolutionary generation in is his Pulitzer-prize winning book, “Founding Brothers.” He titled that chapter of his book, “The Silence.”

Many of the Founding Fathers, knew the practice of slavery was evil but found it politically expedient to ignore and chose to pass the responsibility on to the next generation of Americans. And, as noted, aside from Washington this guilt did not drive them to free the hundreds and thousands of slaves they owned. Nor did it stop them from taking advantage of their position as slaveholders.

[Note that it did not stop Jefferson from having a long-term sexual relationship with his slave Sally Hemmings which most historians believe began when Ms. Hemmings was only 14 years old. I’m sure most would put that in the ‘evil’ category but doubt anyone would argue it ‘necessary.’]

Was slavery “necessary”? Not economically. At least not in broadestr sense. The move by farmers and plantation owners from indentured servitude to slave labor helped large agribusinesses but it was a very bad deal for the working poor and lower-middle class.

Moreover, the acceleration of the slave trade came well after the U.S. independence and establishment of the U.S. Constitution. In that sense, the result of the Founding Fathers’ work was not to put slavery on the path to extinction, but rather on a path to spectacular growth. In 1790, three years after the ratification of the U.S. Constitution, there were approximately 650,000 slaves in the United States. Just thirty years or approximately one generation later, that number doubled to 1.5 million. In another thirty years and on the eve of the Civil War in 1850, the number doubled again to 3 million. Enslaved people were not necessary for American independence. But many wealth landowners in the south felt they were essential for their own economic development and the sale of cotton and other agricultural goods.

I guess one can argue that the acceptance of the heinous practice of slavery perhaps was necessary to get agreement amongst the thirteen colonies to support the nation’s rebellion against the British. Most specifically, it was a compromise to seal support from South Carolina, Georgia, and especially the nation’s largest state – Virginia. In that, it was less of a “necessity” and more a moral and ethical compromise – an acceptance of evil to ‘get the job done.’

The big problem with Senator Cotton’s position is one could read from his (wrong) interpretation of history that slavery was a reasonable “price to be paid” for the establishment of our union. It wasn’t and needn’t have been. Put more directly, it shouldn’t have been. And to believe so would be to pervert American ideas of democracy to an anti-democratic “ends justify the means” ideology – something more appropriate for Chairman Mao than General Washington.

The ultimate irony is that many African Americans –  those who suffered from slavery and segregation – likely agree with one thing Senator Cotton said about the U.S. That the U.S. is “imperfect and flawed land, but the greatest and noblest country in the history of mankind.”  Indeed, Nikole Hanna-Jones opens her 1619 essay noting that her father, a military veteran, proudly flew the U.S. flag outside their small home in rural Iowa despite all the hardships he had faced throughout his life as a black man.

You don’t have to agree with everything said or written in The New York Times 1619 Project. But slavery was a defining element of our first one hundred years of history. It was evil. It wasn’t necessary. And even after slavery’s official demise, its legacy of racism and white supremacy left a heavy imprint on our next one hundred years. And it remains with us today.

Facing and wrestling with the hard truth of our history is not anti-American. It is another form of patriotism.