I must admit that I’ve never been a big Barney Frank fan.  It is not that I didn’t like him.  It is just that I never was a big fan. 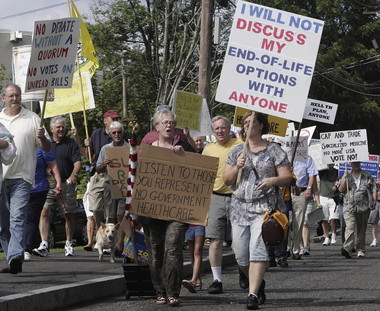 If you want a lesson on how to defuse outrageous claims with a combination of simple language, mild put-downs, some humor, and compelling logic, watch and listen to how Rep. Barney Frank dealt with town hall protesters claiming that President Obama was a facist and that health care reform was akin to Nazi policies.

First start with the mild put down that comes in the form of a question.  Typically it is something like:  “You can’t be serious.”  In this case Barney Frank uses a more provocative variation, “What planet are you from?”  Then, once you’ve gotten someone to admit that they are truly serious about this outrageous claim, highlight the stupidity of it by applauding the right people to be stupid.  In Barney Frank’s diagnosis, being free to be stupid is what America is all about.  Then, when there is persistence the persistence of the screams and rants mount, state the obvious — that dialogue is useless.  Or akin to having a conversation with furniture.

This is superior thinking and communication at its best.