Obedience gets a bad rap.  We denigrate the ‘obedient’ one as someone lacking in spunk, spark, creativity and leadership.  Think about it.  If someone said, “oh, so-and-so, he’s sooo obedient!”  What would you think?  Something between ‘eew!’ and ‘yuck’!

We idolize the  rebel.  We create myths about the  independent souls who reject instruction, laugh at admonition, and defy convention.  And we mistakenly think that doing so is the required path to creativity, individual expression and happiness.

This is an ode to obedience and a ‘watchout’ to the rebel. 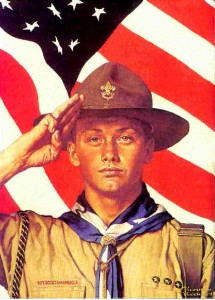 When I look at what’s happening today I’d suggest that our problem isn’t a scarcity of rebels.  Everyone is a rebel.  We all have a social media platform and we’re all ‘mad as hell and not going to take it anymore!’

But if everyone’s a rebel, you can’t have a rebellion.  Just like the world of Lake Wobegon where everyone is above average, creating a culture where everyone is leading (or thinks they are) and no one is following (or is capable of doing so) can’t a movement make.

By venerating the rebel we risk eviscerating the heart and soul of what makes every society, organization, and business strong — the dutiful footsoldier who is dependable, reliable, trustworthy and … yes … predictable.

Don’t get me wrong. I’m not suggesting we promote lemming-like, do-what-you-are-told without question society.  But lowly obedience – simply doing what others ask of you – is a dying art.

Consider the teacher.  When I teach all I really want of the person at the other end is to do what I ask them to.  Read the book.  Complete the drill.  Learn the lesson.  Great that you ask questions and all that.  But at the end of the day if everything is up for grabs, nothing get grasped.

Consider the parent.  OK.  You know that your children at some point will need to rebel.  You know that they need to chart their own way.  And you know that they will be stupid.  Why?  Because you were young and stupid once too.  There was a time that whatever Mom or Dad said, you did the opposite.  And now you’re a parent.  And you  plead with your children “Please!  Just do this … Just this once … Trust me … I know what will happen if you don’t … Just trust me on this one.”  But no … you’re fighting a losing battle

Why do we denigrate the obedient and venerate the rebel?

Here’s a couple of possibilities:

1. The great thing about being a rebel is that you don’t have to be ‘for’ anything.  The rebel knows only one thing – what I am against.  That is why I’m a rebel!  Down with this!  Down with that!  “Tear down this wall!”  What replaces all this?  Beats the hell out of me!  I’m just a rebel.  I tear things down.  I’m not responsible for building things back up.

Which leads me to my second point …

2.  Obedience requires commitment and perseverance – not really popular things these days.  We don’t like difficult.  Difficult is, well, difficult!  The great thing about being a rebel and being against something is that no one holds you much accountable on what you are for.  The problem with obedience is that it, by definition, means you have to be ‘for’ something and willing to both ‘follow’ that something as well as defend that something.  Following is not cool.  Defending is hard work.  Obedience is difficult.  Difficult is not fun.

So here’s to obedience.  It is neither boring nor dull.  Rather it requires conviction and discipline … Which is why obedience can be very unpopular.

One Response to “Ode to obedience”