The myth of independence

This is the day that we celebrate those who went before us some 200+ years ago who sacrificed everything to gain independence from Britain and King George.  In America, we LOVE independence.  We idolize the rebel.  We venerate the ‘self-made’ individual.  We mythologize the pioneer spirit that accepts no limits, little authority, and absolute self-determination. 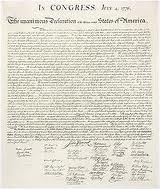 But of course the idea of independence – at least as it is known in popular culture – is a myth .   We all exist in a state that is “in” dependence.  Dependence from King George was simply traded for dependence on a band of vagabond (but quite erudite, stubborn and opinionated!) colonists.  It wasn’t that we suddenly became independent.  Rather, we simply shifted our dependence from King George to each other.  Consider the last line of the Declaration of Independence:

And for the support of this Declaration, with a firm reliance on the protection of divine Providence, we mutually pledge to each other our Lives, our Fortunes and our sacred Honor.

Independence from George.  But “reliance” on God.  And a mutual pledge of our money, honor, and life.  Sounds like a lot of dependence to me.

It works the other way around as well.

Dependencies are what make societies (and economies) function.  So it isn’t a question of being independent or not.

Rather, it is a question of upon what and whom you depend.

A lot of people tell me, “I’m not going to depend on anyone but myself.”

Good luck with that.

Even the Founding Fathers were smart enough not to go there.