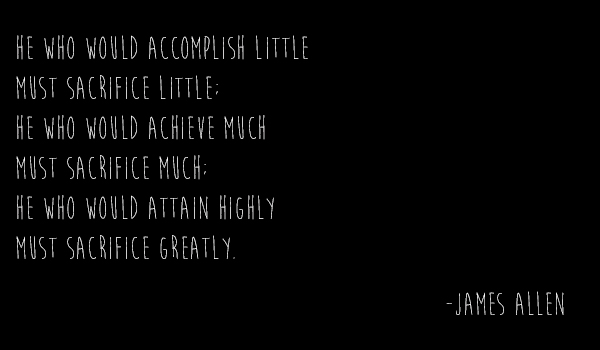 Eww!  It conjures up all sorts of horrible imagery.  Not something you’d raise your hand and volunteer for, right?  Except but of course we do.  Sacrifice is as fundamental to life as air and water, breath and blood.

We sacrifice things every day.  We just don’t realize it.

What prompts a post on sacrifice?  Well, it has something to do with the Dutch.

When you hear the word “sacrifice”, Holland may not be the first country that comes to mind.  But yesterday I read an article in the New York Times on the Dutch pension plans.  It seems that unlike U.S. pension plans (a) Dutch pension plans still exist; and (b) they are not only solvent, but financially rock solid.

Seems that following the financial crisis of ’08 the Dutch looked at the financials of their retirement programs and determined that the only real way of making things work moving forward was to have people contribute more and have plans pay out less.  Oh, and they refused to do any of that funny accounting stuff and base assets on what they “might” be in the future.  People made sacrifices (including my in-laws who are currently on Dutch retirement programs).  It wasn’t easy.  People complained.  It was controversial.  Some of the sacrifices hurt.  But they made them.  And the result is that the retirement plans for the next generation are preserved.

Yesterday I spent time with my daughter (who is half-Dutch!), her husband and their three boys.  My daughter told me of some of the sacrifices they are having to make in order to raise their family as they want to.  Some budget cuts.  Some lifestyle changes.  But things you give up for a much greater good.

Too often we make stupid sacrifices.  For example, we sacrifice our health by consuming yummy but unhealthy foods.  Or we sacrifice the opportunity to help others by focusing just on taking care of ourselves.   Or we sacrifice relationships by spending all our time working and making money.

It doesn’t have to be this way.  We can be smart about our sacrifices.  We sacrifice our own ideological rigidity for the cause of getting along with others.  We can sacrifice a bit of low priced carbon for the sake of the environment.  We can sacrifice time in front of a screen, to spend time with someone who could use a listening ear and a word of encouragement.

So let’s embrace sacrifice!  In doing so we are more aware, more conscious and more in tune with ourselves and each other.  And when the consequences of our sacrifices become manifest, we won’t be surprised, only hopeful that those sacrifices were worth it all.

One Response to “Sacrifice”