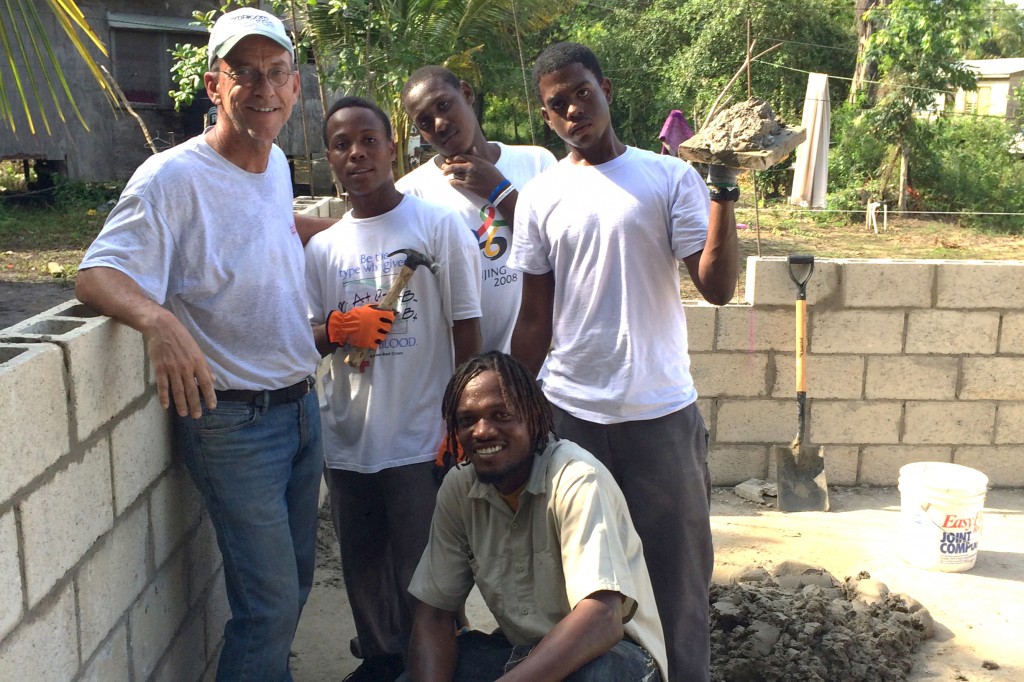 Justice.  It is a good thing, right? But what exactly is it?  How does justice happen?  And how do you pursue “justice” in a way that gives some opening for that other great thing we call “mercy?”  (I am convinced that if justice is simply defined as “eye for an eye” and “tooth for a tooth” then we’d all be blind and toothless.)

Recently Pope Francis called for the end of the death penalty and lifetime imprisonment.  He called these acts “penal populism”.  He said they “promise to solve society’s problems by punishing crime instead of pursuing social justice.”

What is the difference between “punishing the crime” and “pursuing social justice?”  I found out a couple of days ago from a young man named Fritz Howard while spending a week at Tubal, a Christian vocational school just outside of Belize City.

Mr. Howard is the man kneeling in the photo.  You really shouldn’t mess with him.  An imposing but approachable man, he has dedicated his life to working with young men who are “at risk”.  Before his current job, he ran vocational programs and ministry at one of Belize’s largest prisons.  Now he is the full-time construction teacher at Tubal, a school for young men and women .

Mr. Howard was a wonderful teacher and mentor.  It was clear that these young boys held him in high respect.  For them, Mr. Howard was simply:  “sir.”

A group of us worked side-by-side with Mr. Howard and several young men building a house for a woman in need.  Every day we’d head over to the work site early in the morning, come back to the school facility for lunch, then back to the site for several hours in the afternoon.  All in 90 degree heat and humidity.

Now the students at Tubal are wonderful young men and women.  Respectful.  Hard working.  Considerate and caring for each other.  They were a joy to work with.  But kids are kids and sometimes they do stupid things.  And one day, a while we were at lunch, someone – almost certainly a student – carved  into the leather seat of Mr. Howard’s motorcycle something, well, stupid.

Mr. Howard walked over to the bike which was parked underneath the canteen where the kids hung out.  There was a quick conclave with students.  As much of the dialogue was in creole, I didn’t catch a lot of it.  But I could tell by the tone that it was, well, intense!  The group dispersed and soon there was a bit of buzz about a boy identified as the (extremely) likely suspect.

A few of us jumped into the van heading back to the work site.  I talked to Mr. Howard about the incident.  He was understandably very upset.  But what I found fascinating was I didn’t sense he was wasn’t “mad” or “angry”.  He was wounded, hurt, concerned, troubled.  But not angry.

He took a call from someone.  I don’t know exactly who it was.  Likely someone from the school.  Tubal has a “zero tolerance” policy – a “one strike and you’re out” type of place.  And I could only guess what was what was being proposed on the call was to expel the student. But Mr. Howard had a different perspective.  What I heard him say on that phone call went something like this:

“I don’t want to kick him out of school.  If we do that he’ll learn nothing.  He will only end up being bitter about himself, bitter about the school and get in trouble with his relatives and bitter about that as well.  No.  We’ve got too much of that bitterness already with these kids.

And I don’t want a written apology.  Written apologies don’t accomplish anything.  It is just a piece of paper. It means nothing to me and it won’t mean anything to the young man.

No, I want this boy to stand in front of the class, admit what he did, apologize, and explain to me why he did what he did.  I want him to do this in front of everyone. Every student from the school.

We need to show this young man that he always has the option of acknowledging his wrong-doings and taking responsibility for them.  He needs to be able to learn to do that – learn to humble himself – yes, even humiliate himself – stand up and admit to everyone what he has done.  And the other boys need to be able to see this young man do it.  He needs to confront this, apologize and explain this to me and to everyone. That is all I want.  Nothing more.  Nothing less.

Have him do that.  I will accept his apology.  We will shake hands.  Then we will put this behind us, and he and I will go from there.  Then we can build things back up.  Then I can help him and teach him. He can stay, learn, and make something of himself.

If he’s not willing to do that then I agree he’ll have to go.  But we need to give him a choice and give everyone a chance to confess, seek forgiveness and following that, know they can have acceptance.”

It was perhaps one of the most brave, constructive and genuine attempts at “justice” I had ever seen.  Mr. Howard insisted on “pursuing social justice” over “punishing the crime.”

I think Pope Francis would have been proud.