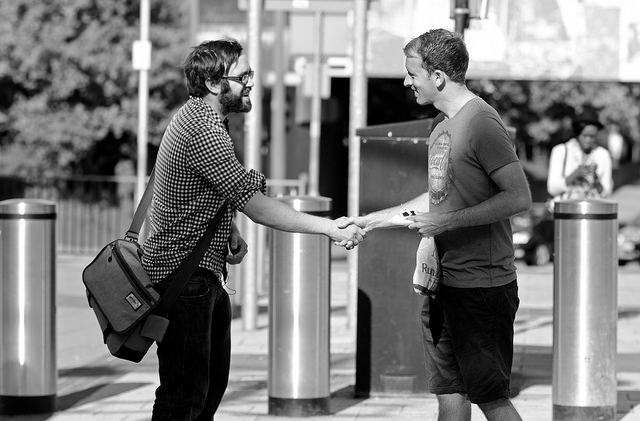 It is perhaps the most asked question in life. It is a question asked between everyone from common strangers to  intimate family members.

In some rare cases we actually want to know the answer!  But most times not. It is just a thing we say. And nine times out of ten we get the standard response.

Occasionally we’ll get a “great” or “awful” which often is very problematic because we then feel obliged to follow up as to  “why” and are now committed to having a real conversation which we never intended to have because we really didn’t care how they were doing we were just using as a placeholder for hello.

I recently started an experiment. When asked “how are you?” I started to respond with a phrase I often heard  my father say and it went like this, “Well, I’m doing better than I deserve.”

This really throws people off.  It is not the ordinary “fine”  and has the effect of causing people to think and react.  Typically, reactions fall into one or two camps.

There’s the group that will challenge the “better than I deserve” response.  Sometimes quite forcefully.

Now I’m sure most of those who object to the unusual “better than I deserve” response to the standard “how ya doing?” question are well meaning, well intentioned and wanting to be helpful and supportive.  They see (or hear!) the “better than I deserve” phrase as one of despondency. I sense they interpret it as someone who questions their own self worth and so is in need of a bit of affirmation. Their response seems to be …

“Oh that’s not true.  I don’t know you but you seem like a nice enough guy.  I’m sure you’re deserving of a lot of good things. I know that I am.  Everybody is deserving of good things.  So cheer up!  Take a little credit for yourself!  Run a victory lap and be proud of all the good things that are happening to you.”

Then there are those that “get it.”  At least get it in the sense of what my Dad originally meant.

For him the “better than I deserve” response was an expression of gratitude. We have so much, even when we have little.  We are so blessed, even when things are pretty crappy.  Just the joy of “being” and experiencing life is an undeserved privilege.And then there are all the stupid, silly and sometimes downright mean and awful  things that we’ve done that we have somehow gotten away with! If we were all accountable for everything we did and got what we “deserved” for the completely dumb things we do I doubt many of us would survive past our teens!

I know that is true for me.

I remember complaining to my Dad once that “life isn’t fair!”  I will always remember his response.  “You better be glad, son, that life isn’t fair.  Because if we all got what we deserved we’d be in big trouble!”

Months ago, my daughter wrote down the toast she made at her little sister’s wedding. It has been by far the most popular and widely read thing on the Juicebar.  Ever. It was about expectations and the joy of not having any (expectations, that is). Seeing everything, good, bad, and indifferent, as a blessing.

So if you ask “how are you?” and if I respond “better than I deserve,” know that I believe this to be a very, very good thing.

“Nice to see you” by Just Ard is licensed under CC BY 2.0
No comments yet…