We can learn a lot from the Declaration of Independence. Happy July 4th.  On this day we  celebrate being ‘free’.

When, in the course of human events, it becomes necessary for one people to dissolve the political bands which have connected them with another, and to assume among the powers of the earth, the separate and equal station to which the laws of nature and of nature’s God entitle them, a decent respect to the opinions of mankind requires that they should declare the causes which impel them to the separation.  We hold these truths to be self-evident, that all men are created equal, that they are endowed by their Creator with certain unalienable rights, that among these are life, liberty and the pursuit of happiness. That to secure these rights, governments are instituted among men, deriving their just powers from the consent of the governed. 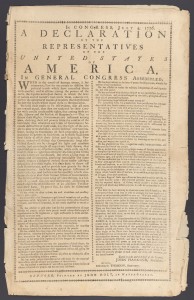 The authors  go on at length describing the reasons for which they declare themselves to be ‘free’ of King George.  It is a very healthy list that culminates in “a prince, whose character is thus marked by every act which may define a tyrant, is unfit to be the ruler of a free people.”

Good.  We all can agree that independence from tyrants is a good thing.  But that was not the end of it.  While we often focus on the the things that founders wanted to be ‘free’ from, we don’t pay enough attention to how the framers closed the document:

And for the support of this declaration, with a firm reliance on the protection of Divine Providence, we mutually pledge to each other our lives, our fortunes and our sacred honor.

This idea of dependence is lost in much social and political thinking these days.  People claim that individuals, left to their own, can decide and do better than business and government.  But as Mark Lilla recently wrote in The New York Review of Books, this type of groupthink has its own pitfalls.  Indeed, there’s little in history to suggest that left alone, the individual can go very far.  The question is not independence vs. dependence.  The question is what things go in which category.

So let’s celebrate both.

I want to dependent on the military and police to arrest the bad guys and keep me safe.  On farmers to figure out a way to feed me and the rest of the world. On teachers to help educate my children and my grandchildren.   On financiers to help lend me money when I need to invest.  On bankers and money managers to keep my investments safe.  On judges and lawyers to administer justice.  On  engineers to find a sustainable and affordable way to keep the lights on.  On people smarter than I to invent the next new thing.

I want people to depend on me.

Like the founding fathers, I want to depend on God and my fellow man.
Independence alone leads to self indulgence; a cruel master.   Accepting dependence through serving others is the highest delight.

What do you depend on?